Thirty attended.
A better financial year.
Challenging all round for the Trust as council savings meant there domain covered two different Areas of the City Council.

A community festival prompted by Bridges Community Trust, with an emphasis on the mining history of The Meadows, drawing from the Clifton Colliery.
Bilsthorpe Colliery brought their extensive display.
OMTRA and Meadows Diabetics Society shared a stall.
The Scouts and Guides were there too.
(Fuller res. photos available on Facebook.)

The bandstand was in use again, this time for folk music.

Forest fans may have witnessed the folk music after the match.
Meanwhile, the new WWI memorial has been repaired / finished.
(Fuller res. photos available on Facebook.) 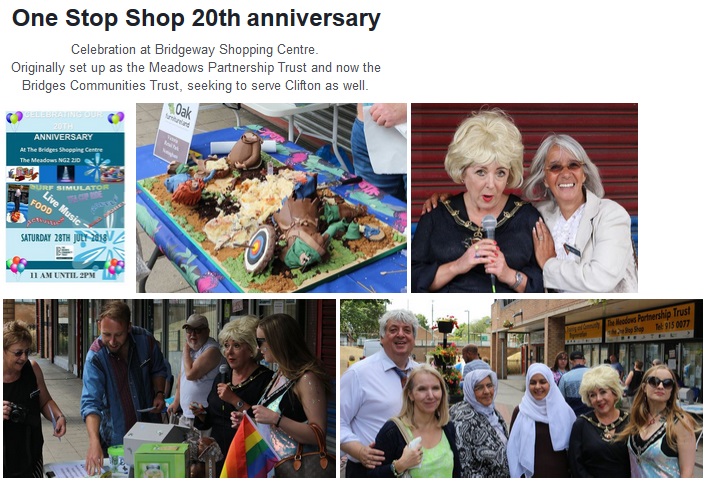 Lilian Greenwood MP cames to The Meadows as part of the annual Summer tour of the constituency and held coffee morning in Brookfield Court to hear of local concerns including construction timetables and crime, and visited the Community Information day run at Bridgeway Shopping Centre.
Highight was beating a team of 6 in Connect 4! 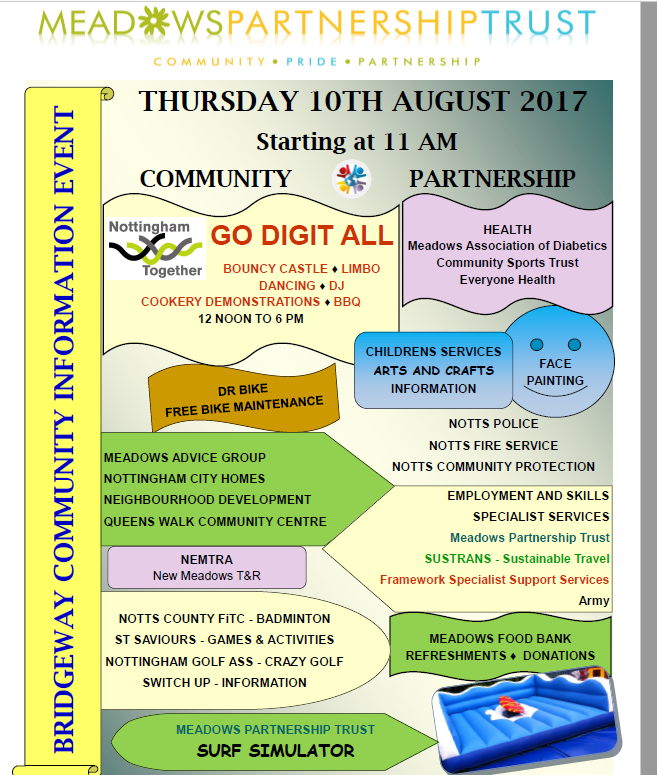 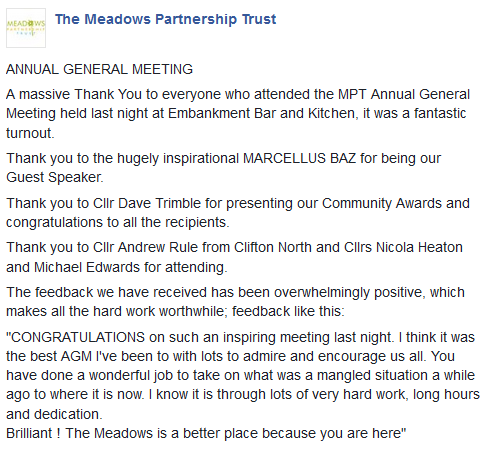 A very difficult year for Meadow Partnership Trust, but they’re working at it and their AGM was very well attended (50-60).
Marcellus Baz talked about his boxing school, how boxing was a way out for him from troubles when he was young and the international interest he’s been receiving for his work.
As for MPT, they have a new role in supporting the voluntary sector across Area 8 (The Meadows, Clifton, Wilford and Ruddington Lane) so are looking to change their name and articles to reflect the wider range.  It’s a disappointment, but the cuts are hitting and MPT are fighting to keep something going.

Sixteen Meadows residents attended the delayed AGM, the sixteen including guest speaker and council leader, Jon Collins.
MPT are recovering from the fallout of employment services contracts that were just too challenging and an attempt to run the Embankment pub for the community that suffered from poor external advice. 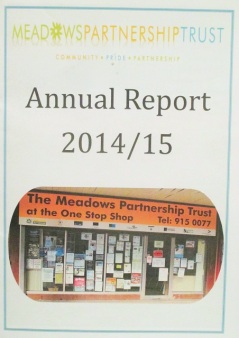 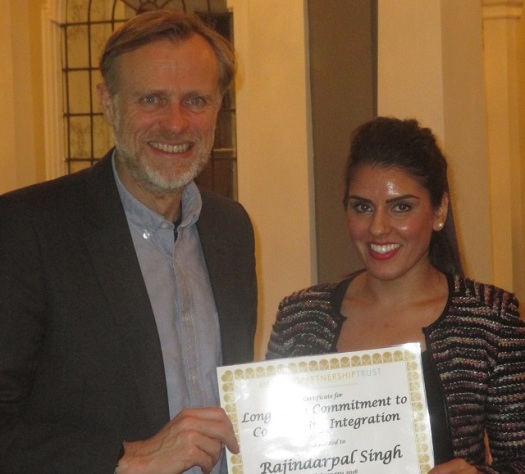 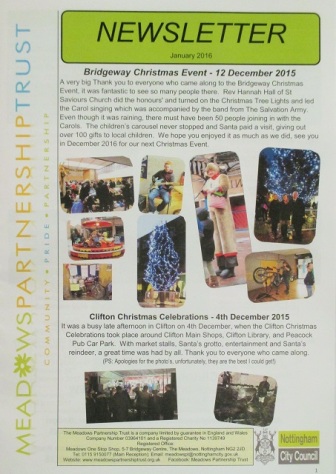 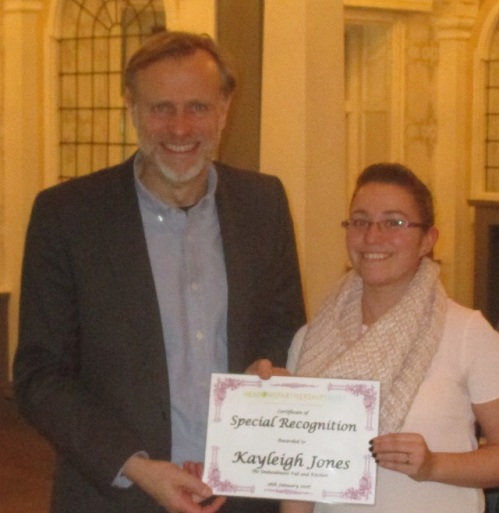 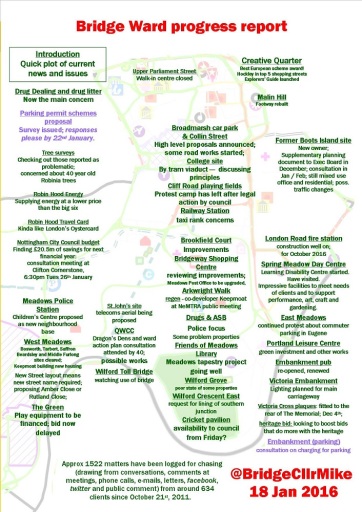 Miriam Gifford is the new chair, elected after the annual report and accounts were presented and agreed.
Awards were also presented to Rajinaarpal Singh’s daughter for Raj’s long commitment to The Meadows, the Meadows Foodbank for its community work, Kayleigh Jones for playing a key role is the successful transfer of the pub to Castle Rock and Alicia Deans, both for her work on a community case and for her conduct when someone was threatening to jumping off Trent Bridge.
A 12 page community newsletter has also been produced.
Jon Collins spoke on the budget, the importance of the voluntary sector and various points on The Meadows.
On the budget, probably £20.5 million of savings to be found for the next year, despite plans to increase council tax by 1.9% plus the 2% acknowledged by Gov’t as being needed for social services for older people.
On the voluntary sector, Jon said it was important and the various community groups were being protected from cuts, with money being allocated to the Areas of Nottingham more in proportion to need; he acknowledged MPT’s impact.
On The Meadows, Jon stressed the ambition for its communities to be more sustainable through a greater social mix. The council had also done more for The Embankment, and he welcomed the new pub.
Jon reported further progress with the expansion of the tram network, the launch of Robin Hood Travel and Robin Hood Energy.
He also re-iterated plans to build more affordable housing.
Alan Parker, from the council’s regeneration team, gave further news on new housing, including dates for current construction, planning dates for Arkwright Street, Blackstone Walk and the re-opening of full length of Arkwright Walk to cyclists and pedestrians.
I circulated a graphical progress report and in answer to questions, said works for the row of trees in the park along Bathley Street are being prepared, and that I wanted more progress on boosting the Bridgeway Shopping Centre rather than campaigning for new supermarkets.

A roving surgery around Ryeland Gardens, where again, people are asking about opportunities for better jobs.
Later, at Meadows Partnership Trust, discussion about the challenges face now that funding has both reduced and switched from grants to awards for bids.
Funding for the successful “Meadows Matters” magazine is under threat, as is the community development MPT delivers.
Consultation has also begun with the users of Long Meadow day centre for older people, as we explore why take up is now only at two-thirds of its capacity.