I was elected to Nottingham City Council from Bridge ward on 20th October 2011.

Local representatives
I rely heavily on the support of my co-Councillor Nicola Heaton and my Member of Parliament, Lilian Greenwood.

Aims
Themes have been –
• Pride: in The Meadows, the city centre and the neighbourhoods of the ward; to support In Bloom campaigns; to rehearse and celebrate the history of the places of the ward, and in particular the radical history of the old city centre, once known as “Banner Town”;
• Ambitious: for the city and the ward; celebrating the arts, culture and events of the city; supporting bids for investment in parks and community facilities; liaising with business at the city centre forum and advocating the Meadows Action Plan;
• Green: pushing green architecture, green transport and green energy, including through Enviroenergy; trying to look out for trees;
• Accountable: speaking out as an elected representative; publishing progress on 2 web-sites (and through Facebook & Twitter); reporting electronically at the end of each month;
• Available: attending public meetings, tenants and residents groups’ meetings (NeMTRA and OMTRA), and supporting their (and MPT’s) special projects; holding advice “surgeries” and roving “surgeries”; seeking concerns to report for action;
• Socialist: for a more equal society; achieving more together than we do apart; helping those most who need most help, including by helping Meadows Advice Group; celebrating progress against the five giant social evils; meeting the challenges of the future (globalisation, an ageing society, climate change and peak oil), and supporting trade unions in their campaigns for better work, and conditions of service;

Way of working
I seek to add value as an elected representative – celebrating our free society and embracing the principles of public life; demonstrating how we can achieve more together in partnership and through public services; helping those most who need most help; and meeting the challenges of today (especially seeking local jobs for local people, challenging poor private landlords and liaising over regeneration projects & problems) and the future.
For current services and new initiatives, I test the vision, the planning and the performance management, the capacity, capability and culture, the overall legitimacy; and whether it is inspirational.
I try to visit sites of planning applications in the ward that have been referred to Planning committee and have sought to promote greener architecture and facilities for bikes in particular.
As of 31st December, 2014, 1244 items of concern (“cases” including demands for improvements, requests for information, concerns about failure in service delivery, for perhaps around 517 clients) that require some form of oversight have been logged. Whilst walking around, I also report problems in the public domain (including tipping and litter, road and pavements defects), often directly to 2 specific council officers (1 for the Meadows and 1 for the city centre), for them to deal with; there may well have been around 400 of such reports.
Much of my work is reported on this photo-based blog which I began in October 2012 and which has over 1500 posts – changing the long running – http://www.labourblogs.com/public-blog/michaeledwards/ – to hold longer text based reports (and even lists of links), such as the end of month reports that I write and e-mail to activists serving the ward’s communities.

New Opportunities in the Meadows and the Challenges that come with them
Progress on crime, regeneration and the tram has been qualified more recently.
Crime had fallen significantly in the Meadows, but gone up recently.
The number of complaints about the services provided by Nottingham City Homes has remained low, although a local lettings had to be introduced following problems during the decommissioning of the stacked maisonettes (Q blocks).
Utilities serving the Meadows near the tram lines will be good for 23 years, but the project has struggled with utility companies staffing arrangements and discoveries underground. The start of the trams is expected to be six months late although a revised date won’t be known until January.

Progress since 2011 –
– the decent homes programme, seen through after lobbying by Lilian Greenwood MP;
– opening of the extension to the outstanding Welbeck primary school;
– doubling the capacity of Riverside school;
– updating of NCH “crosswall” semis and demolition of the “crosswall” flats;
– a new way of running Portland Leisure Centre (closure was threatened);
– new street lighting throughout The Meadows;
– continued success for the “In Bllom” project and the community gardens;
– the erection of 11 out of 12 Meadows story poles carved from the trees that were fallen for tram works and
– plans to improve parks.

The tram line constructers have made a number of engineering changes to avoid cutting at least 27 trees down – a storm water sewer will remain under the track bed; overhead electricity supply pylons will be staggered; and the layout of utilities and the new cycle path have all been re-aligned. The changes followed a tree by tree check by local councillors. Active campaigning led by NeMTRA and MPT has been a key factor in saving trees that were at risk.

Major change is envisaged for the Meadows Recreation Ground and the Victoria Embankment.
The principles of the masterplan to were adopted in February 2012 and improvements made (the main road has been re-surfaced; £87,000 of Section 106 funding for the gardens, on top of official opening of flood defences; NHS Nottingham paid for an outdoor gym to be installed in the park).
The masterplan is being worked up and plans for a new cricket pavilion are well advanced and being discussed.
Plans for a new multi-use pavilion are to be announced in February.

The Meadows regeneration plan has been re-published; the challenge is to get failed housing replaced by new housing paid for outside of existing budgets. The decent homes programme was only finally fully approved two years into the new national government.

Residential car parking and deterring commuters from parking in The Meadows has prompted consultation in 4 different neighbourhoods. A whole programme of changes is envisaged, subject to local support.

Meadows concerns
There has been a continued determination to tackle tipping.

New Opportunities in the city centre and the Challenges that come with them
The Creative Quarter, with extra investment in the Lace Market and in Hockley.
Notable that new census has found population of Bridge ward has leapt in 10 years.
Banner Town – for a number of reasons I have been supporting the understanding of Nottingham’s radical history.

City Centre concerns
I have reported issues concerning the public domain and walked the city centre at night with the Police. Some pressure was required to get the staircase within West End Arcade re-opened. Sainsbury lorries. Recycling: orange bags scheme began for Lace Market and Hockley in December 2012.
The speed and volume of traffic through the city centre is a concern and air pollution can be particularly bad on or near these roads.

Other neighbourhoods
Broadmarsh: major shopping area north of the canal
– huge shopping redevelopment (with extra tram stop) and pedestrianisation (Collin Street and northern part of Carrington Street) planned;
Narrowmarsh: between the Lace Market cliff and the canal
– site available for development, most likely for a tertiary college.
Cartergate: below the Ice Centre
– some housing and environmental concerns to address.
Westcroft: the railway station and offices and housing along Queens Road and Crocus Street
– park and pay by phone may be introduced along Crocus Street;
– significant development expected in the area, with student accommodation expected and a new Sovereign House development getting outline planning permission;
– Meadows Square is the narrow public space being created at the foot of the new tram viaduct.
Eastcroft, including Boots Island, incinerator and council depot:
– …
Meadow Lane, Turneys Quay and Trent Bridge:
– plans to illuminate the bridge differently; repairs needed to decorative lighting.

City concerns
I campaigned against an Executive Mayor in May 2012 and for Paddy Tipping, former Meadows resident, to be elected as Police and Crime Commissioner in November 2012.
Taken some interest at the development of the railway station, and, over the years, the improvement of the Midland Main Line.

Impact of cuts in public spending
I have liaised and sought to help on the following issues of concern –
• The budget changes brought new challenges to the future of the Portland Leisure Centre.
• Cuts in grant to the Meadows Partnership Trust that has prompted the organisation to find new ways of generated money to provided services, through social enterprise.
• Cuts in benefits to those most in need, especially families with disabled children, means Meadows Advice Group has needed to reach even more people. I was pleased to welcome four new members to the Board. Preparations for reductions to Housing Benefit to under-65s who are deemed to have a spare bedroom, and in Council Tax Benefit to under-65s has required a lot of attention.

Full list of Roles
I serve as –
• a member of the Area 8 committee (Meadows and the 2 Clifton wards; second year as Chair);
• a member of the Planning Control Committee;
• a member of the Audit Committee;
• a council nominated member of the EnviroEnergy Board;
• a council nominated observer of the Meadows Partnership Trust (MPT) Board;
• the Chair of the City Centre Forum (and of the Area committee before it was abolished);
• the Chair of the Meadows Advice Group for just over 2 years (2011-14).
I attend MPT public meetings, tenants and residents groups’ meetings (NeMTRA and OMTRA), and have supported –
• the Arkwright Meadows Community Gardens for their in Bloom work,
• the Meadows Art Gallery promoting local artists and
• the Meadows Tree Project which will use Lime tree wood to make art celebrating the history of the Meadows;
• the formation of Friends of the Meadows Library.
I attend the Meadows & Clifton Family and Communities Board meetings (whose work includes oversight of Sure Start Centres).
I attended the NCH Area Panel and attended a tour of sheltered housing complexes with Lilian Greenwood MP during August 2013.
I hold advice “surgeries” at the Meadows library (as well as collecting casework at the Bridgeway Shopping Centre) and I attend ward walks.
I also attend meetings of, and report progress to, the Labour Party and my trade union, the Transport Salaried Staffs Association.

Personal
I had the opportunity to write for the Nottingham Post, welcoming Shrewsbury Town Football Club to Meadow Lane for the first time since I was elected to represented the ward in which Notts County play.
I really enjoyed the 50th Jamaican independence celebrations. Celebrating the Olympics. The laying of tram tracks. City Centre events like Carnival, Game City and Light Night. Radical History tours.
Santas grottos and summer reading awards schemes.

Since publication
Issues that have arisen since this report may well be referred to in end of month reports published in the home page, or on my public blog.

Ian MacLennan
Ian passed away in August, 2011. He brought soul to his work as a Councillor and was much loved, with the community paying for a garden seat to been installed in the Meadows Recreation Ground in his honour. I was pleased to speak at the ceremony.
Upon election, I took up all the roles Ian had previously held. 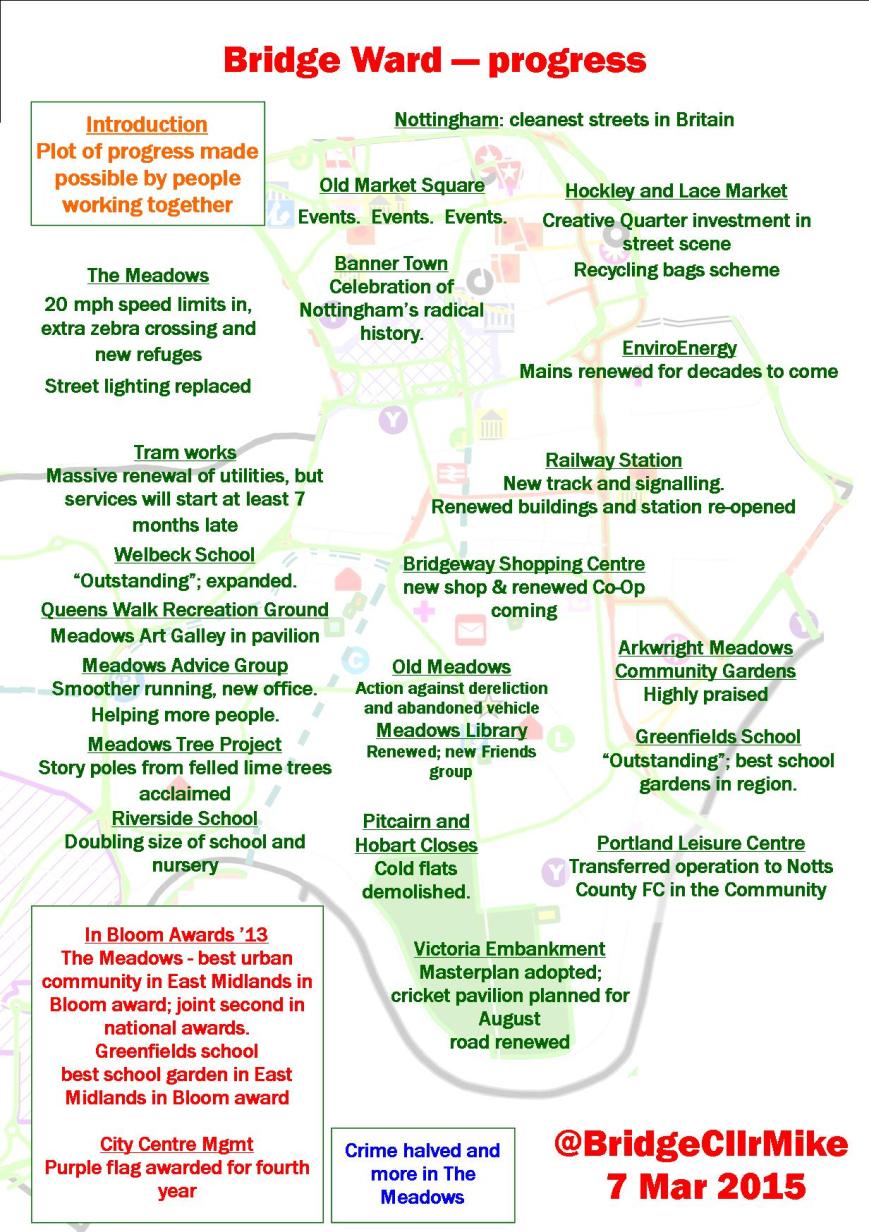