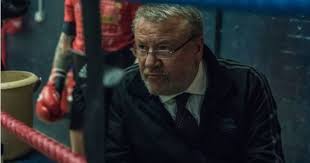 A small-scale film from which an actor from the “This is England” series who draws on his life experiences as an amateur boxer to write and convey a story of dealing with problems like alcohol addiction.
Though said not to be typical of a boxer movie – an almost life or death movie against a champion – it does have the somewhat predictable fight sequence of almost looking defeated before making a come back.
Despite some of the formulaic stuff, the film is distinctive, if a tad slow.
(r:6.6; e:3, s:3, t:3.)