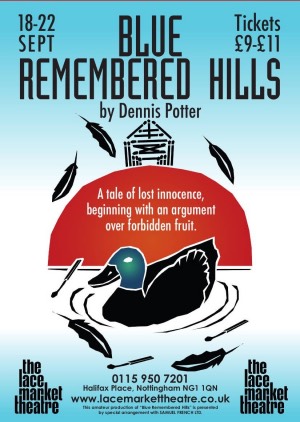 Blue Remembered Hills remembered from the BBC tv series with rosy pink spectacles.  Written by Dennis Potter.  Colin Welland and Helen Mirren, adults playing seven year old children, and what a hoot it was.
But the behaviour, the story.  Awkward.  Unpleasant behaviour.  Children cruel to animals and to each other.
And in this production in the studio of the Lace Market Theatre, up close.  Opposite the other half of the audience, their faces showing how socially awkward the story is.
–
A very distinctive production.  Engrossing.  Go see.
–
My quibble is with Dennis Potter’s ending.  It didn’t need to be so life-changing.  Cos that something significantly bad happened (rather than terribly awful) is enough.  Cos no doubt I wasn’t alone in being pained by the memories of things we did in the woods and the remote buildings as country kids, and pained by the evident disappointment in my parents’ faces when you inevitably confessed.  And I was a good boy, I was.  It’s just that things happened, that kinda paralleled some of the incidents showed.  (Worse than Theresa May’s confession; and don’t even bother asking a librarian about their mischief.).
So blue, yes.  And misremembered.  But worth seeing.
One last thought.  Audrey (“Ord”) is one of the seven year old’s in the 1943 Gloucestershire setting – one year younger than my Mum – “Aud” as we say in Shropshire.    Surely she was better than that!