So many spectacular goals by Cyrille Regis but not many will remember the one he scored wearing a Shrewsbury Town shirt. 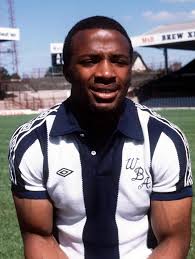 Meeting an inswinger from the wing, getting ahead of the last line of defenders and powering in a header from 12 yards.  (“Good morning, ball”.)
Yes, 1981 and West Bromwich Albion wore either the classic navy & white stripes or the iconic green & yellow stripes – both deemed to clash with Salop’s blue & amber.  So when they drew Salop in the League Cup in an era before third strips (and universal TV coverage), the Albion had to wear our all red away kit.
–
It was a phenomenal match when the second tier side beat the top tier side 3-all at home.  By which I mean, the Albion were 3-0 up at half-time, thanks in part to Cyrille’s header, but we brought the game back to 3-all at full time (a last minute goalmouth dribble by Steve Biggins).
–
Regis’s death is so emotional for many reasons – the phenomenal footballer he was; Cunningham & Batson; that West Brom team; how he broke barriers for black players; the content of his character; that 59 seems no age for such a former athlete – and cos I witnessed it: vs Salop, vs Man U at The Hawthorns (1979) and the “match of the decade” (that wasn’t) at Anfield (also 1979).
–
It brings back memories of the racism – especially that gorilla chants were OK and good cos they put black players off (which I felt often was not the case – e.g. Wimbledon at home, Laurie Cunningham scoring at Old Trafford in the 5-3 victory).
You wanted to be on the Three Degrees’ side, cos of the victimization, cos it was right, and yes, because they were the heroes.
–
See Guardian tribute; and a cartoon tribute.  Look out also for the Youtube videos.