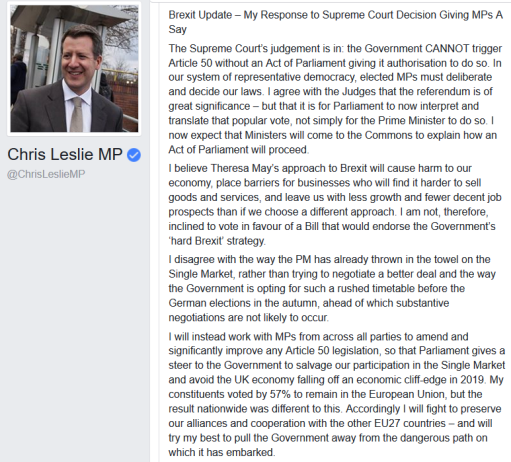 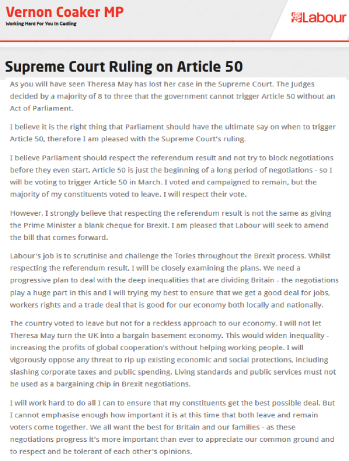 If we are to defend the British way, then Parliament making the big decisions is the British way and the Supreme Court have sensibly said it’s required for Article 50.
That it matters is indicated by the government trying to stop it.  A Parliamentary process should expand understanding and offers the opportunity to do more to get quality decision-making into the negotiations over leaving the European Union.
I voted REMAIN.  Considering the nature of the debate during the referendum, we can usefully explore public thinking as the following questions are addressed –
– What price to be paid for keeping access to the single market, or what price to pay for losing the access – e.g. must we go down the path of low corporation tax and cuts in public services?  What will the longer view be of the fall in the pound and making deals businesses, such as Nissan, to stay here?  How likely are other trade deals and can they match the scale already in place?  Could new trade deals put a premium on local production, local distribution and local jobs for local people?
– What are the implications of dropping out of the customs union?
– How will the British react to needing visas to visit the rest of Europe?  What happens to the British who live and / or work (either all the time or part of their time) in the EU?
– How do we manage our border on immigration when it becomes the edge of Northern Ireland?
– How will people react as they realise that promises of extra money for the NHS are not going to realised, and that we have in fact had to recruit more “bureaucrats”?
– How will not being in the EU start to feel when so much of what we value in sports and culture continues at a European level?
Whether to vote for Article 50 – to start negotiations over leaving the EU – or not, is dividing those who voted for REMAIN, but if people voted for the referendum, then how can you square that with not voting for the start of the process?
I think a second referendum will be needed because by the time new arrangements are ready to be considered, public opinion will demand it.
It’s still more than possible that the UK will not leave the EU – but it will need time and a lot of contemplation before a reversal of the June vote can be achieved.  The loss of direction and focus on the UK’s real issues in the meantime, is the price we will have paid.
Meanwhile, further to the opinion pieces of Chris Leslie MP and Vernon Coaker MP, Lilian Greenwood MP has started a survey of Nottingham South residents.