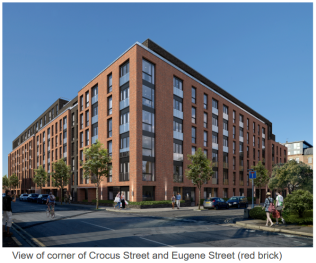 Planning permission for such a scale of development – similar in size to the flats already on Queens Road – since 2001.
The latest design has street level apartments rather than “live-work” units and a car park at street level too, with a raised garden on top.  Shaped as a large E, there is a variation in the design of the upper floors.
The unit will be run by one management company, offering the flats for private rental.  There is a demand for such property in Nottingham, and hence a renewed urgency to develop, from a firm that purchased the site 6 months or so ago.
During the latest committee process a number of issues have been explored.  An initial pale grey / cream brick will now be an option, with the committee generally preferring a red brick.  The colour to be worked out with actual samples, along with details regarding the lighting and attractiveness of the front entrances along the street.  Concern too about how the top of the buildings will look from London Road and whether the corner of Crocus Street and Summer Leys Lane is attractive enough.
The developers have already taken on board comments about the history of Crocus Street, and the crocus being the symbol of The Meadows – with some saffron colour styling suggested for the ground floor and possibly parts of the building may be called Crocus and Saffron.  Some electric plug-in points for cars are to be provided, further to an interesting idea of private storage cages in the car park area.  A private cycling path to Summers Ley Lane from the car park will also be provided.
Predictions for numbers of children living there is low, as low as the existing Hicking Building on Queens Road.
So many people coming to live in this distinctive part of The Meadows is an inyeresting opportunity to boost usage of our library, our parks and open spaces, and if we try hard enough, Bridgeway Shopping Centre.
–
Meanwhile an expansion of a nursery on Private Road, Mapperley, has triggered some cotroversy.