It weren’t great.
Politics was described as being in a stale funk last year; and the same source said the most successful in politics are doing it by making people confused.
Alexei Sayle said “not even politics seems to be able to change politics.”

The autumn statement on government finances, tax and spending announced growth of 3.0%; only to reduce the claim to 2.6% two weeks later.
Claims by the Conservative Chair that the deficit has been halved was ahead of itself – it’s only projected to reach that level by 2015/16. The aim was to have no deficit by the next year – this now some time away.

Austerity isn’t working, and yet we’re promised more of it.
What was working – East Coast mainline trains making a profit under public ownership – was sold off; the Royal Mail was sold off for significantly less than its value and firms that promised to be investing sold their shares quickly, including the firm that advised on the price to sell at.
Bright claims elsewhere aren’t matching the feel on the ground. Highest ever number of private sector jobs contrast with the new jobs being on low hours contracts with no security. Subsidy for low wages means the benefits bill is going up with growth – go figure. The effective Meadows Advice Group are doing the same level of work – despite unemployment in Bridge ward falling by 19% (one-fifth). And food banks – 21st century Britain – and we need food banks.
Properties for sale in The Meadows are being snapped up by private landlords who can pay more – explained by low security for working people and the housing benefits regime. More casework this year for dealing with bad practice.
The resultant increased desirability of council housing comes just as the council is seeing through its resolve to demolish the unpopular stacked maisonettes. Nottingham City Homes went through a sticky patch but have changed the local lettings policy in response (a success for a protest group that met weekly for a while).
None of this has been loosened up by the bedroom tax – which was supposed to have made more properties of the right size available. Instead, that, and the expectation of all under 65 to contribute something to their council tax (echoes of the poll tax) have increased the number of debtors going through formal proceedings.
Crime is up and although explicable in part cos of changes in counting methods, responding to challenges on Arkwright Walk were hampered by cuts to youth services.
More cuts in council services are on their way – the implications of cuts coming in April are still not fully understood.
The NHS is also creaking; and this year the Wilford Grove surgery was closed in September without proper consultation.
So –
– jobs market broken;
– public finances worse;
– crime up;
– NHS creaking;
– more cuts to council services on their way;
– housing market broken;
– social security worse;
– an inability even to count the actual unemployed.
And all missing a framework for what genuine progress would mean – a vision, built on values. We could do worse than saying proper jobs, proper rates, proper terms and conditions. Success for all in education. Restore the NHS to the level whereby it didn’t warrant a question in the 2010 prime ministerial debates. As always, tackle the five giant social evils.
Other initiatives and projects have struggled.
An aspiration to run The Embankment pub with a social enterprise looks to have fallen through, in the face of a £500,000 investment bid from a local pub chain.
The expansion of the tram network is delayed, perhaps by six months, as the contractor has struggled, most notably with surprises from underground and utility firms not geared up to get the necessary done fast enough.

So to the good news.
Twenty miles per hour speed limits are being introduced to make the streets more pleasant.
The Victoria Embankment Masterplan is coming to fruition and a Trent Bridge Cricket offer to finance a new cricket pavilion that will be accessible to all and meet modern expectations of the cricket board is under development.
The Community Gardens and in Bloom continue to succeed; and Friends of Meadows Library is building.
The Queens Walk Recreation Ground pavilion is decorated with new mosaics, and
The Meadows Story Poles means The Meadows has more free standing art than the city centre.

We can do better.
Austerity hasn’t worked.
Let’s change direction in 2015.

As last year, “debating” Tories; talking green principles and the “curve index” at the planning committee; the busier community events; the carnival parade; radical histreh.
Not quite such a good year. 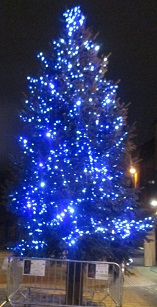 Tram services through The Meadows were due to start this month; instead it is reported that it is set to start in “June-ish”. I’m not expecting a proper date for some weeks yet.
The Miners Welfare has been demolished and works starts on taking down the Q blocks in the west of The Meadows was also due.
A design and access statement is now being developed for a new cricket pavilion, to be sited just north of the ramp running down to the cricket pitches from Victoria Embankment.
Santa Grottos have been held by both Meadows Partnership Trust and Friends of Meadows Library.
More roving surgeries: including with MP Lilian Greenwood.
The biggest concern remains the cuts in support for council services by the national government. “The Council’s initial main budget proposals for 2015-16 published for consultation include £21.8m of savings. … this will result in reductions to services in some areas and a proposed reduction of 240 full-time equivalent posts. Additional proposals required to save a further £5.3m will be put forward before the budget is finally set next year.” 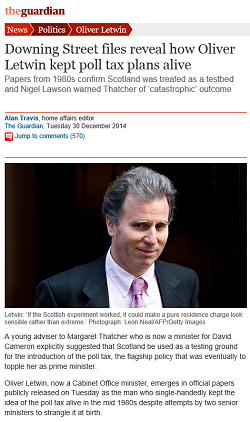 All incredibly disappointing – an eighties debacle in national policy making – papers just published and written up by The Guardian.
Loads of people said a plain charge on every person instead of a property rate, irrespective of property value or ability to pay, would cause problems.
Yet it still happened.
The council tax was its replacement – and this is regressive – huge base band A, higher rates not in proportion to increase in value and topped at a band G.
Now, the re-introduction of the requirement for all below a certain age to pay something.
And a debate over a “mansion tax” – which will be a national property tax rather than local – but more progressive in intent. 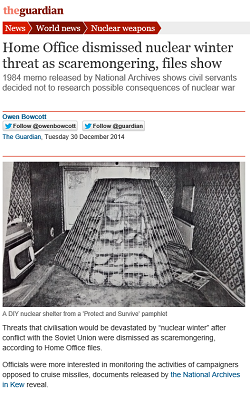 A Guardian write-up of nuclear weapons policy in the eighties. The enemy was outside and within (in peace camps). Building home shelters as a defence against thermonuclear attack was thought legitimate – just look at that photo. Concerns over the impact of a prolonged winter on the northern continents (a nuclear winter) after a major nuclear weapons exchange was not thought worth researching.
The wiki article shows how subsequent research has waned and waxed on the validity on the likelihood of a nuclear winter, but I think still shows a major exchange would have made life near impossible for a number of years.
Those who protested to survive were right.
TO BE UPDATED. 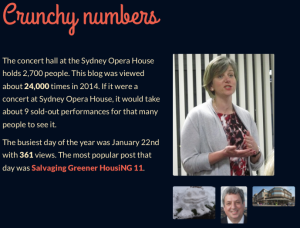 Not clear for the focus on the Sydney Opera House. It’s actually about 3 fully booked up Nottingham Ice Arena events, except that includes return visits, so perhaps just 1 full booking?

In fact 90% British, but grateful to visits from Australia (extended family?) 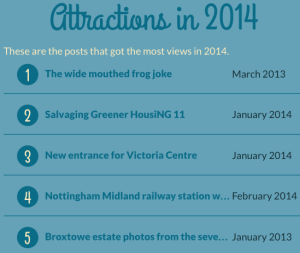 No surprise – it’s the wide-mouthed frog joke that the main individual attraction.

Wilfred Owen’s home in Shrewsbury has been grade II listed.
A celebration and recognition of the World War I poet.
One wag said he had hoped that the celebrations of the beginning of World War I would be over by Christmas.

It’s just an opinion, but BBC tv’s Top Gear aren’t telling the whole truth about their Patagonia special.
3 presenters and a back-up crew, educated and quick I should think to spot codes and hidden meanings.
“H 982 FKL” can easily be seen to refer to Falklands 1982.
Newspapers puzzle pages and Facebook tests us on our ability to spot patterns like that all the time. 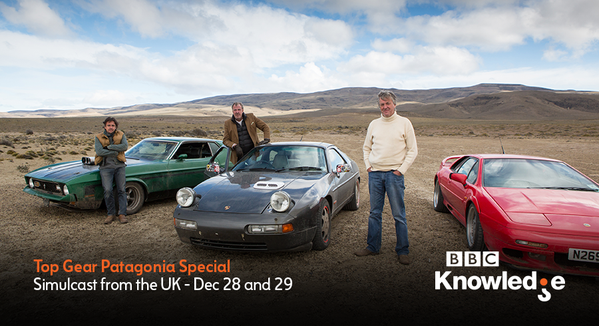 A photo from the trip shows the offending number plate missing.
And in the world of Falkland veterans, deep south red necks, and dare I say, 1970s British football hooligans, there are different codas and there are expectations to react to provocations.
Don’t make what happened to the Top Gear outfit right.
Does make you think the controversy was sought.
Probably, like the red necks from a previous trip.
That felt braver, more righteous.
Save, now we’ve seen the security crews that travel with them.
But weren’t the 2 programmes dull?
‘Oh and then we got lost; and lost again; and then had to be dropped off on a beach with no road; and then we crashed the cars in some ice.’
I’m not a petrolhead – and I will defend the Morris Marina – but it was a delight to see the Lotus doing so well.
The cars and the locations needed to do more of the talking – the presenters didn’t have enough material for 2 hours.
I would have liked to have seen more of El Calafate (where the cars were adapted). The glaciers. The calving. The icebergs. The cowboys. The wildlife. The Welsh.
We spent some days there and the memories are very strong and very sky blue (glaciers scattering light much as the sky does) and very happy.
(No, I’m not arguing Top Gear have spoilt it for other British tourists.)
Perhaps more of that might have helped the programme.
So Christmas tv – Skyfall (excellent in parts) – Prof. Branestawm (pleasant) – Doctor Who (witty and scary) – Miranda (poor, apparently) – Top Gear (dull) – The Wrong Mans (excellent) .

… shouts a chair of a Notts County football club supporters group in the N Post.
Apparently a new parking permits scheme around the Meadow Lane neighbourhood “could have an adverse effect on attendances”.
And that’s an advocate of Notts County.
This is an article in search of a story.
It seems charging for spaces to stop all day parking by commuters isn’t the story – despite it being the reason.
And how’s this for customer focus – a ‘pub in Meadow Lane, said the changes would affect business through the week because its car park was mostly used by staff’.
–
Changes to the original scheme were made following consultation and special signs for this scheme have been introduced; this has caused a delay until January.
–
More change is most likely on its way.
– Crocus Street is being abused by commuters; consultation for a scheme has been going on for some time.
– Residents of Eugene Gardens have organised a petition about commuter parking, and that’s before the nearby Meadow Lane change is introduced in January.
– There are complaints about commuter parking throughout The Meadows, including from near ‘ng2’ business park and along Victoria Embankment.
Responses for much of The Meadows are likely to be tied in with the roll-out of the tram – it’s an obvious point for any consultation if it can be pointed out that the tram might make a difference.

© Copyright Michael M Edwards, NG1 1JS / 1A / Flat 5 Unless stated otherwise, all rights including those in copyright in the content of this website are owned by or controlled for these purposes by Michael Edwards.
News and political views
Blog at WordPress.com.