June has ended on a very high note as 70,000 people visited the city centre and The Meadows to enjoy Armed Forces Day on the 29th.
Now, here comes the summer.
Save the misery of Osborne’s public spennding review which demonstrated that his economic judgement from 3 years ago was all wrong and the austerity has done nothing to reduce the deficit in the last year. We need to aim higher.
Meadows Advice Group are helping more people with seeking benefits, but the probems expected with cuts to council tax benefit and housing benefit introduced in April, are on their way.
Crime is still falling in The Meadows and local Police have just run another special targetted operation. But it’s increasing elsewhere and risk areas are alcohol and shop-lifting related. There also more specific instances of ASB being reported to us.

With events just past, and MedFest events and Meadows in Bloom presentations to come, there’s been some focus on street scene. Some relief to the problems of tipping in the alleyways of the Old Meadows will be sought by the introduction of individual household bins in September, as part of the week of action, but some prosecutions may well be needed.
Initial ideas on redeveloping the New Meadows after properties on Arkwright Walk and Blackstone Walk are being developed. The challenge is, without the £210 million of public money once proposed, how can the private sector be encouraged to invest? It seems unlikely that the Bridgeway Centre will ever be replaced as was once envisaged, so opportunities for a higher profile from buses running down Arkwright Walk and the renewal of buildings to the east of the shops are being explored.
The tram will bring a new profile to Queen’s Walk, but the New Meadows is starting to feel the duration of the works. A new connection between Riverside Way and Robin Hood Way will open soon. Traffic management and residential parking issues are being followed up, including hopes for a refuge on Meadows Way East near Mabel Street.
This month’s ward walk was in the south-west of The Meadows; Nicola and I held a roving surgery in Beardsley Gardens.
We are meeting City Homes tenants pleased with new doors and kitchens.

Friends of Meadows Library has been officially launched and we are working with tenants and residents from the East Meadows to re-launch EMTRA. We also supported ACMG at Cycle Live, NEMTRA’s barbecue, Meadows Diabetes Society, Meadows in Bloom and MPT at its quarterly public meeting.
585 matters have been logged for chasing (drawing from conversations, comments at meetings, phone calls, letters, e-mails, Facebook and public comment) since October 20th, 2011, as of 30th April.
Elsewhere, the people of Wollaton West ward voted for a Labour Councillor, in what was the only Nottingham ward without one.
Full council called for universal credits to be delayed and debated pay day loan companies; I chaired my first meeting of the City Centre Forum, pushed for a green factory in Bulwell as it was given planning consent and attended a women’s art exhibition at the Contemporary Gallery helping those who have suffered domestic abuse. 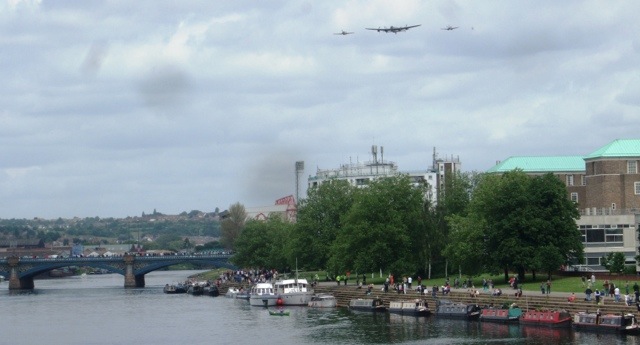 Watched the flyover from the suspension bridge – a mistake until the aircraft flew over the City Ground, County Hall and the river. Majestic.
http://www.raf.mod.uk/bbmf/

Thanks to Ian Selby for taking my picture during the Lynx helicopter display.
It was successful day, blessed by good weather.

Classic view of Victoria Embankment from the suspension bridge.

People enjoying the ‘arenas’ created by the bund.

The play area opened 20 months ago; including a wide-mouthed frog slide.

A very interesting part of the day, with volunteers, exhibiting and camping out alongside the River Trent and entertaining a lot of people.
These volunteers love their history, and like dressing up. 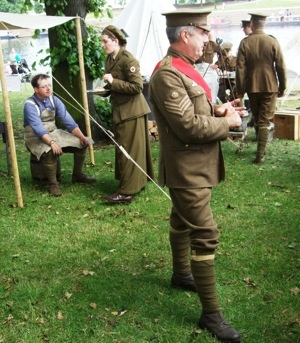 Sherwood Forester (Derbys), circa 1900; and Wellington’s army soldier, circa 1812, and going to Waterloo (Belgium) in two years ime. 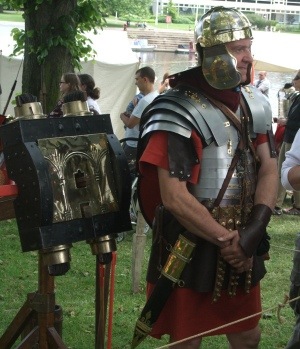 War of the roses, circa 1483 (check), with a fairly aggressive recreation of a skirmish; and a roman soldier.

Just loved this rose, in the Memorial Gardens. 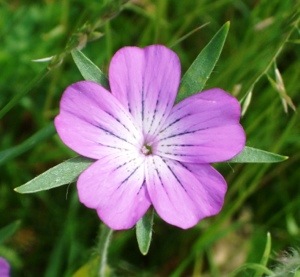 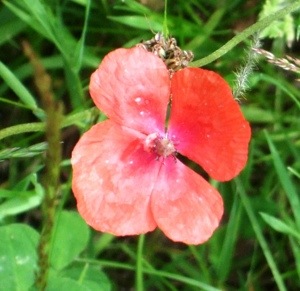 Wild flowers growing on the bund. 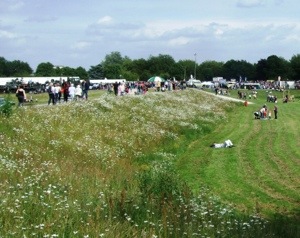 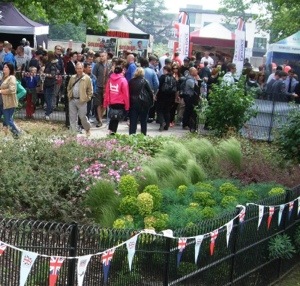 The bund, and flower beds near the bandstand.
The meadows is getting ready for a regional inspection next week.

Initial estimates are 70,000 visited the Victoria Embankment and Meadows Recreation Ground.
We were blessed by the weather and so queues for everything were long.
But the event was free and put on in part to entertain those short of cash in these difficult times.

Kids loved clambering over the army vehicles and aiming the guns. I know I did when I was young. Yet I still ended up joining CND. 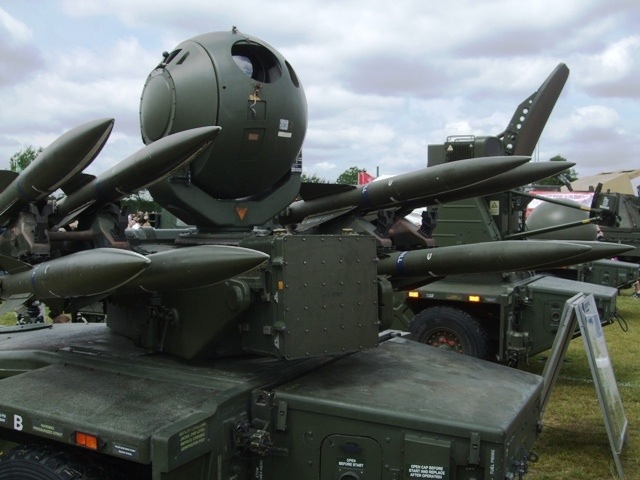 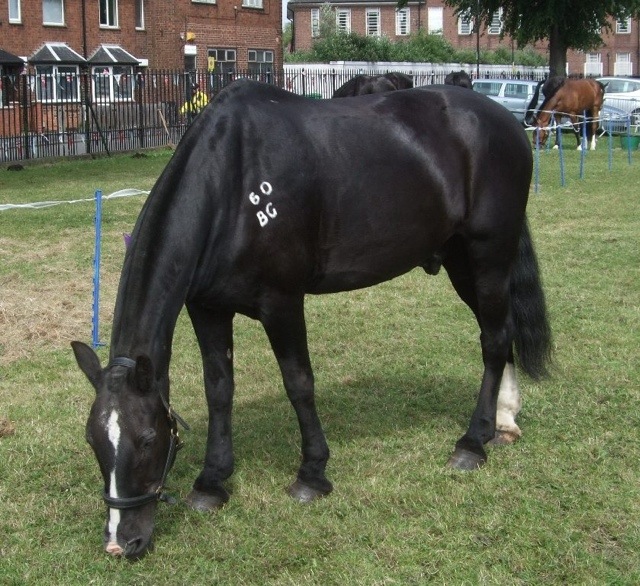 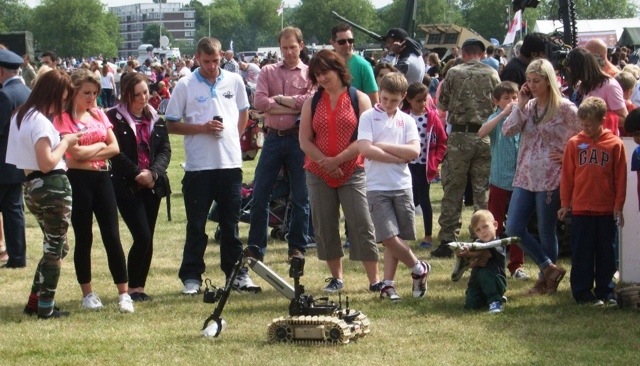 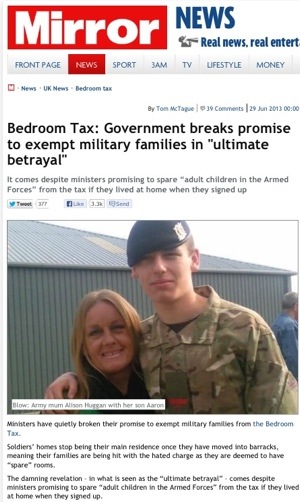 I’d bought the Mirror before the service and saw this page 2 article – http://www.mirror.co.uk/news/uk-news/bedroom-tax-government-breaks-promise-2008073
At the buffet lunch reception, I took the newspaper to show to Jim Murphy MP, but he was busy and instead met up with Phillip Hammond, Secretary of State for Defence (he was heading for coffee).
Gist of the exchange was –
‘Is this right?’
‘No, of course it’s not right, it’s the Mirror’, qualified quickly by something like the Mail runs the same kind of stories.
He’d been made aware of the Mirror story last night but hadn’t had chance to read it.
He then glanced it, but the gist of the conversation was he’d never signed up for exemptions for those in barracks, whilst I wondered how you’d distinguish between those who had happened to be sent abroad rather than stay at home.
He said he was gonna check it out Monday morning.
The exchange took longer than this suggests and people were sent over to stop an interrogation of a guest at a civic event, but it had been genial.
So I guess we look forward to news on Monday.